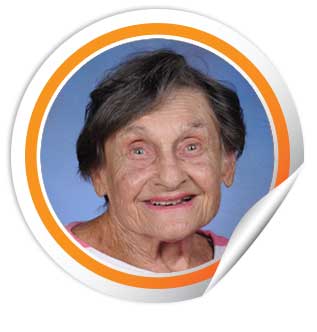 At 92 years old, Ann Fingerhut leads an active lifestyle and loves nothing more than travel and adventure. Last November, however, an accident threatened to end it all.

It started when Ann returned home from a quick trip to the grocery store and left her car on as she finished unloading her bags. Afterwards, she reached inside the car to grab her keys and turn the engine off, when it suddenly began to roll backwards. Still leaning halfway into the car, she lost her balance and fell to the ground as the vehicle continued to move in reverse. Ann screamed as the wheel ran over her leg and the pain began to set in.

“I started losing a lot of blood and frantically yelled for help, but I did not see anyone around,” she says. “My neighbor heard me and was shocked to see the amount of blood on the driveway. She immediately called 911 and brought me towels to help control the bleeding.”

“I never lost consciousness,” she says. “When I saw how bad my injuries were, I thought I was going to die, but the doctors and nurses told me I was a strong woman and that I would be okay.”

After surgery, Ann was taken to Delray’s Wound Treatment Center for specialized care. She received negative pressure wound therapy to help her heal faster. She also went to Delray’s Pinecrest Rehabilitation Hospital for physical therapy three times a week to regain movement in her leg.

“I highly recommend all of the doctors, nurses, therapists and staff that provided me with excellent treatment,” Ann says. “The team is so kind and attentive, and motivated me to keep fighting.”

At 92, Ann knew her recovery would require patience and perseverance. She left Pinecrest, but while at home, Ann’s knee became infected, and she returned to Delray’s wound clinic. She received treatment three times a week and noticed an improvement after each visit. Today, she is doing very well continues down the right path to a full recovery.

“After all the treatments I received at Delray Medical Center, I have never felt better,” Ann says. “I am swimming each week, and I am so excited that I will be able to take a river cruise along the Danube in Europe this fall. Without the superior services I received after my accident, I would not be able to continue pursuing my passion of travel!”