Barry didn’t just win his weight battle, he won insurance coverage for others. 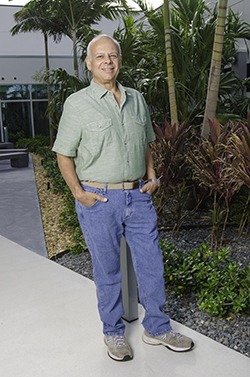 Since 1986, Barry Kolesar has worked as a 911 dispatcher. Over the years, he has received many accolades doing this job that he loves. But there is a downside to it, as well.

“Having a sedentary job contributed to my having an issue with obesity. Less than a year ago, I weighed 300 pounds. I suffered from diabetes, high blood pressure, gout, peripheral neuropathy and I had to have back surgery. I was taking eight medications per day. I had tried every diet and exercise program, but it was all a temporary fix,” said Barry.

After considering it for ten years, he finally decided he was ready to undergo bariatric surgery to solve his obesity problem once and for all. That’s when he checked his insurance policy, which was through his employer. It had an exclusion for bariatric surgery. Barry couldn’t believe it. He met with the Human Resources to try and understand why this surgery wasn’t covered.

“They told me they really had no idea. They thought it was considered a cosmetic procedure. But now they understand that it has far-reaching health benefits—and yet they wouldn’t cover it. But that wasn’t the end of it for me. I latched on to the fight for coverage like a pit bull, and kept at it until finally, three days prior to my scheduled surgery, I found out they would cover it. And not just for me—but for any employee. By arguing for my own benefits and being persistent, I was able to pave the way for many of my co-workers to benefit from this procedure, as well, and that has been very gratifying.”

The surgery was successful, and since late last  summer, Barry has lost 120 pounds, reaching his goal weight of 180.

“I feel very good. I have much more energy, less aches and pains and I sleep better. I’ve gone from eight daily medications down to two and my gout, diabetes and peripheral neuropathy are gone,” he described.

Kolesar felt confident that he made the right decision regarding the surgery—and the choice to have the procedure done at Delray Medical Center.

“The process at the hospital was seamless. Everyone was professional and kind. I was especially appreciative of Diane, the nurse who did my pre-op interviews and has followed up with me ever since. She made me feel so cared for— as if I was her only patient. And Dr. Ariel Rodriguez and his staff were second to none. He is intelligent and professional with a great bedside manner.”

Feeling younger, healthier and more energetic has its advantages. Barry is enjoying life more these days. He bought himself a bike---and a boat, and he’s spending much more time active.

“For me, one of the best parts of this whole process was that by fighting to have this procedure covered by insurance, it opened the door for others. One day, a woman who works in my office came up to me and told me that by doing so, I might have saved her husband’s life. Now that’s something to smile about.”