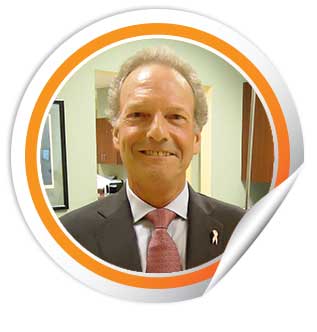 Bill Plough still remembers when his father was diagnosed with spinal stenosis, a narrowing of the spinal column that puts pressure on the spinal cord.

"He was in his 80s," Bill remembers. "He would always say that his legs felt like heavy wooden logs, and in the final years of his life, he was bound to a wheelchair. I hoped to never end up that way."

When Bill was 58, he started having trouble standing for long periods of time.

"My legs felt exactly like my father had described it—like heavy wooden logs. I suspected I had the same disease, but decided to ignore it because I was so busy at my job."

Working through the pain

Bill endured the discomfort and pain for years, until he simply couldn't take it any longer.

"It got to where I couldn't go through the toy store with my 7-year-old son without having to sit down," he says. "I couldn't play football or shoot hoops with him for more than five minutes at a time."

"I would speak at seminars and have to lean against a table or chair for support. I tried to appear like I was relaxed, but I was really just trying to relieve the stress in my legs. I was forced to retire early and seek help," he says.

Plough visited a neurologist who officially diagnosed him with spinal stenosis. The doctor prescribed different treatments such as epidurals and physical therapy, but nothing seemed to help.

"The anesthesiologist who did the epidurals said I looked like an 80-year-old man and that I had one of the most severe cases he'd ever seen," he says. "I knew I would be in a wheelchair soon if I didn’t take more extreme measures."

Dr. Eidelson spoke confidently to Bill about a minimally invasive robotics procedure offered at Delray. It would be less painful and Bill would recover much faster than he would from traditional spinal surgery.

Bill agreed, even though he was apprehensive about having to spend time in the hospital.

"My mind was put at ease, however, the moment I walked through the front doors of Delray Medical Center," he says. "From the gentleman at the front desk who welcomed me, to the nurse who wheeled me out, I was treated with nothing but courtesy and professionalism."

Bill was in the hospital for three days, and within 10, he was walking around his house. Three weeks later, he was walking outside, and two months after that, he could walk two miles a day at a 16-minute pace without pain.

"The recovery time was outstanding," he says. "I went from feeling 80 years old to younger than my actual age of 60 in a matter of weeks!"

Bill believes his surgery and recovery were so successful because Delray Medical Center is committed to using the latest technology like the robotics system they used to treat him.

"The surgery made it possible for me to move forward in my life," he says. “I wouldn't be able to throw a football around with my son; I wouldn't have the opportunity to pursue a new job; and I certainly wouldn't be walking two miles a day otherwise.

"As I walk around each day without pain, I know that each step is in the right direction."