Weight loss opens up a whole new world for Christina

“For me, the worst part about being overweight was the anxiety and depression that went with it.” 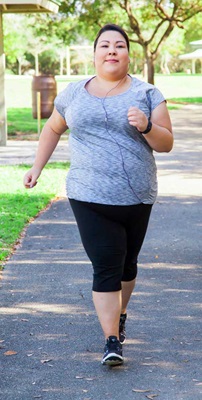 At just 34 years old, Christina felt worn out. Oftentimes, she didn’t want to leave the house because she felt self-conscious about her weight.

“It got to a point where I couldn’t stand how I felt about myself. I felt like people were staring and talking about me because of my weight. And sometimes they were. One of my worst moments was when my husband and I were out for dinner celebrating our anniversary. On what should have been a happy occasion, the night was ruined when I saw a funny look on my husband’s face. As I turned to see what was upsetting him, I saw some teenaged girls making fat faces at me. I have a wonderful, loving husband, but that made both of us feel terrible,” Christina describes.

Christina’s poor self-image wasn’t the only reason she sought help with her weight loss.

“Both of my parents were diagnosed with diabetes in their 40s. As a result, my dad almost lost his leg and my mom had health issues, as well. I’m 34, and I started to feel both genetically and statistically like a freight train headed for trouble.”

Christina had tried every diet and exercise imaginable, and though she would lose some weight, she always gained it back.

“All of the hospital staff was great. By the day after surgery, I was able to do laps around the hospital halls,” Christina continues, “I was back at work two weeks later, but I think I could have gone back after a week.”

Seven months after the surgery, Christina feels like a whole new life is open to her now.

“I’ve lost 60 pounds and am still losing. I eat differently now,” she says. “I prepare healthy food for the week on Sunday nights, I practice portion control, using appetizer-sized plates for my meals. I’ve even started eating seafood, something I wouldn’t have touched before,” she describes.

Best of all, Christina is no longer hesitant about going out.

“My husband and I go out all the time now. And I feel like I can do anything! I’ve started riding a bike—something I hadn’t done since I was a preteen, and now I am addicted! I go to the beach in a bathing suit—without wrapping myself in a towel. And I’m running in my first 5K next weekend!”