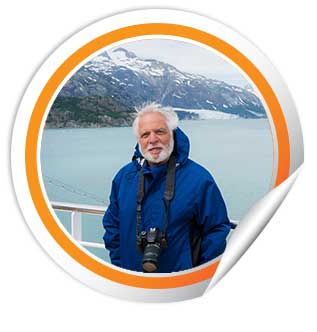 From climbing the magnificent Ayers Rock in Australia to riding a hot air balloon in Istanbul, former professor, Arthur Ruffino, has traveled all over the world. In fact, it was just after returning home from another exciting trip, this time to Guatemala, that the unthinkable happened.

Arthur was having dinner with friends in his condominium building in West Palm Beach when he suddenly collapsed. He was rushed to the nearest emergency room where a cardiologist discovered his fainting spell was a result of end-stage heart failure.

“I suffered from a “silent” heart attack years prior that did a lot of damage to my heart,” he says. “However, I was able to travel without difficulty up until the day I fainted, so I didn’t realize how badly my heart had deteriorated.”

Arthur had an implantable cardioverter defibrillator placed in his chest to help control any abnormal heart rhythms, but he continued to experience dizziness and faint-like symptoms. After a second type of defibrillator failed to help, Arthur underwent a cardiac ablation procedure. During the procedure, small wires called electrodes were placed inside his heart to measure electrical activity and potentially destroy the areas causing life-threatening arrhythmias. However, Arthur continued to have “episodes” as he calls them. His cardiologist recommended that he see Dr. Phillip Habib, an advanced heart failure cardiologist on the medical staff at Delray Medical Center.

Upon meeting for the first time, Dr. Habib realized that Arthur’s condition was dire. His face looked grey and his lips were purple. He used to live a very active lifestyle during his travels, but when asked to do a standard six-minute walk test, he didn’t even last three minutes.

At 75 years old, Arthur was not a candidate for a heart transplant. Dr. Habib recommended a new procedure called LVAD implantation that could be his only chance for survival. Short for left ventricular assist device, an LVAD is a surgically implanted mechanical pump that attaches to the heart, enabling it to pump blood more efficiently. Delray Medical Center is the only hospital in Palm Beach County and the Treasure Coast to offer the breakthrough heart therapy.

“I was ultimately left with two options,” Arthur says. “It was either surgery or the morgue.”

Dr. Brian Bethea, a cardiac VAD surgeon, implanted the heart pump in Arthur’s chest. He spent over a month recovering at the hospital, before being transferred to Delray Medical Center’s Pinecrest Rehabilitation Hospital.

“As the first patient to have this procedure performed at Delray, they pampered me,” Arthur recalls. “Dr. Habib visited me every single day and even told the nurses to update him about my condition in the middle of the night.”

After about a month and a half of physical and occupational therapy at Pinecrest, he can now do many of the things he wasn’t able to do immediately following surgery.

“I had to relearn to walk,” Arthur says. “I’m continuing to improve little by little through outpatient therapy and exercises at home.”

Everyone, including the cardiac surgical team and the staff at Pinecrest, was extremely pleased with Arthur’s progress and look forward to using the LVAD procedure to help more patients.

“I couldn’t have asked for better care,” he says. “And it didn’t end when I left the hospital – I still talk to the doctors, nurses and staff on a weekly basis. They genuinely care about me, and I consider them friends.”

Even though traveling will now include a new set of challenges, like getting through airport security, Arthur is determined to continue adding stamps to his passport.