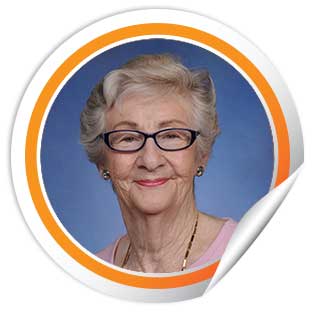 When Bernice Miller was 18 years old, her friend begged her to go to a dance in downtown Manhattan to meet men, and she grudgingly agreed. After having been to several other dances without any luck, Bernice was fed up. However, it was that night that she ended up meeting the man she would spend the rest of her life with.

Fast-forward nearly seven decades later, the couple just celebrated their 65th wedding anniversary. Bernice has always felt grateful that she made the decision to go to that dance, but a recent incident in particular reminded her of just how lucky she is to have a husband who is always there for her.

“In the middle of the night about six months ago, I fell while walking to the bathroom,” she recalls. “I went down so hard that my husband woke up from the noise.”

He called 911, and an ambulance brought her to the emergency room at Delray Medical Center. Bernice soon found out she fractured her pelvis and broke her left wrist, which necessitated wearing a cast for six weeks.

“This wasn’t the first time I suffered an injury due to a fall,” she says. “About two years ago, I was brought to Delray Medical Center after a friend found me sitting between two cars in a parking lot. I broke my patella and underwent surgery.”

However, she says what made this most recent experience even more positive than the first is that, this time for therapy, she went to Pinecrest Rehabilitation Hospital.

“I underwent two weeks of physical and occupational therapy, and I couldn’t believe how much progress I made,” Bernice says. “The wonderful therapists made me feel confident and ready to return home. I can’t say enough about Pinecrest – it truly is one of the best places to go for rehab.”

After she was discharged, the hospital arranged for therapists to come to her home, and Bernice continued to make small improvements every day. Although the incident is now behind her, she will forever be grateful to the staff at Pinecrest and Delray Medical Center for giving her her independence back.

“Sometimes in the moment, you don’t realize how seemingly small decisions can affect your life in big ways,” Bernice says. “It was fate that brought me and my husband together that day, and it was fate that led me to Pinecrest Rehabilitation Hospital.”