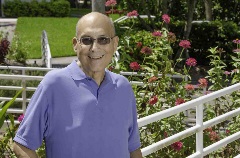 Bret Hollander had just finished the last stop on his Meals on Wheels route and was stopping at a grocery store to pick up ingredients for his dinner. It had been raining, and when he went to pull out a cart, he had to yank on it due to the condensation between them. The cart dislodged suddenly, throwing him off guard, resulting in him falling to the ground. He ended up breaking his lower hip bone in two places.

“At this point I was semi-conscious and in a great deal of pain. The EMS workers took me to Delray Medical Center. When I arrived, I was stunned at the team of professionals that were immediately by my side, checking to make sure I didn’t have a heart condition and that everything was okay,” Bret said.

Bret needed to undergo surgery immediately. He was impressed by the care he received throughout the entire process. When it was time to go to rehab, an attorney friend of Bret’s recommended Pinecrest.

“I looked into several different facilities, but Pinecrest looked the best to me—and when I found out it was just steps down the hall from where I was, well, that was even better,” Bret said.

At Pinecrest, Bret was impressed with the high level of care he received and with how warm and friendly the nursing staff was to him.

“Employees I encountered from all over the hospital were just incredible. They took the time to get to know me and did everything they could to help. They went well beyond their job descriptions—like Helen, who swapped recipes with me, and Dori McClendon who shared stories of her family. I felt so close to her that when I left, I insisted we take a picture together.

Bret is back home now and recovering well.

“I’m so happy to be out in the sunshine again, eating home-cooked, organic food and enjoying Florida with my beloved wife every day. But I will never forget the incredible experience I had at Delray Medical Center. Everyone I met was a gifted caregiver. It’s the difference between just doing a job and being a friend. Everyone I encountered took the time to get to know me. Delray Medical Center really is the most incredible place.”