Rehab in the garden heals patient’s body and outlook 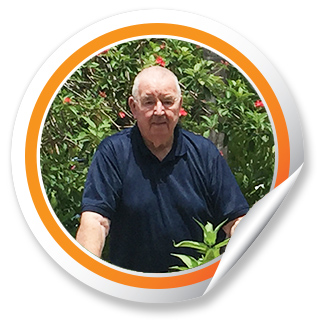 For years, Seamus Devine ignored his own pain and symptoms to dedicate his full attention to his wife, who suffers from a progressive illness. He chalked up feeling unwell and his loss of appetite to a case of the blues, until one day, his abdominal pain became so severe to the point that he couldn’t ignore it any longer.

Seamus visited the emergency room at Delray Medical Center, where the medical team performed an emergency exploratory laparotomy to find out the cause of his severe abdominal pain. Upon discovery that Seamus had an incarcerated hernia, the surgeon immediately performed a hernia repair. Afterward, he was transferred to the Intensive Care Unit for five days to treat his other conditions, including high blood pressure and chest pain.

Seamus’ daughter, who happens to be a nurse, flew in from California to be by his side. “The staff was amazing,” Janice says. “They treated my father with the utmost kindness and respect, and with their encouragement, he improved daily.”

Soon, Seamus was well enough to be transferred to Delray’s Pinecrest Rehabilitation Hospital, where he spent about three weeks regaining the strength necessary to return home and care for himself. Initially, he seemed depressed, discouraged and overwhelmed, his daughter recalls. The daunting road to recovery had taken a mental and physical toll on Seamus.

“When you’re 79 years old, you begin thinking that maybe this is it. I’m on my way out,” he says.

However, after working with the occupational and physical therapy teams, he began to see progress and feel motivated. Since Seamus loved to golf and be out in the sun, his occupational therapist, John, personalized his rehabilitation plan to include time in the garden. With its serene setting and natural beauty, the garden helped make the hard work feel less like a chore and allowed Seamus to actually enjoy his exercises.

“The way my father lit up after that was incredible,” Janice says. “He would come back tired but with a smile on his face that was infectious. The garden truly changed my father’s recovery!”

Since she eventually had to return to California, John helped Seamus send Janice videos on his iPad so she could see him in action.

“You can’t be happy about being sick, but frankly, I’m glad I was sick at that particular place at that particular time because the staff was all helpful, every last one,” Seamus says. “I think if you’re going to be sick, you better be sick around nice people.”

Seamus says John’s positive attitude paired with having the opportunity to be outdoors and appreciate nature was truly the best medicine. “When you see people with enthusiasm for their job, it’s like a bad cold—you catch it,” Seamus says, chuckling.

After returning home, he went back to the hospital for a follow-up appointment and made sure to stop by the garden to see what new flowers and herbs John was growing. Seamus left feeling happy and relieved knowing that the garden continues to flourish and will no doubt have a significant impact on future patients’ lives. 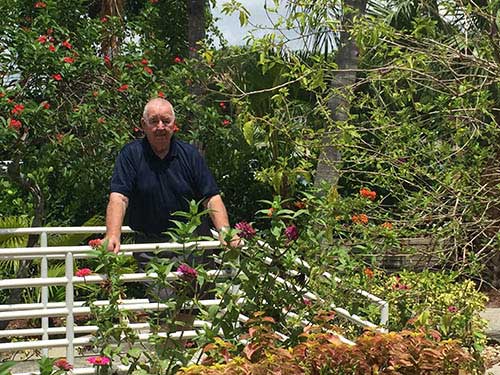