With his stroke behind him, once again, Ronald is ready to focus on his swing. 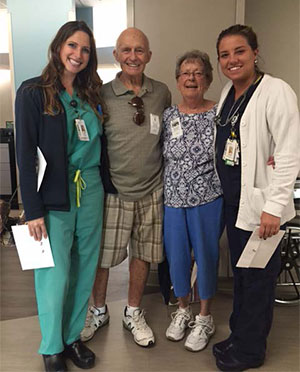 Spending the winters in South Florida allowed Ronald Williams to escape the cold Canadian winters back home. But little did he know that his proximity to Delray Medical Center would provide him something even more important.

“It was a normal day, and I was home alone, sitting at my computer, when I began to feel pins and needles on my forehead. All of a sudden, my pen dropped out of my hand and hit the floor. That’s when I fell to the floor, as well. Though extremely difficult, I made my way to a chair, but I couldn’t imagine what had happened or what was wrong,” said Ronald Williams.

Luckily, Williams’ wife came home shortly after his fall. She saw that his mouth was drooping, and that he was unable to speak and was concerned he was having a stroke. She ran and got a neighbor, and they took him to the hospital immediately.

“I was out of surgery within two hours of the time I entered the door at Delray Medical Center. I was once again able to lift my leg and arm, and my speech returned. Dr. Nils Mueller cut out the clot, and I have no residual problems from the stroke,” continued Williams.

“The care I received was beyond excellent. Dr. Mueller is down-to-earth, yet brilliant, and all the nurses were amazing. Julianna and Charity in the ICU were so kind, and they monitored me constantly. When I moved to the fourth floor, Jessica, my nurse, was heaven-sent. Her cheerful demeanor would make any patient feel better!” he described.

Back home in Canada, Ronald is going to therapy and feeling good.

“I can’t wait to get back to the warm weather in Delray Beach—and get back on the golf course. I live in a small town in Canada, and I am so lucky that if I had to have a stroke, it happened while I was in Florida, close to Delray Medical Center.”